Sunrise Pest Management follows guidelines established by the Washington State Department of Agriculture. The average initial carpenter ant treatment will include the following:

Since most structural damage occurs here, the technician will treat current or potential nesting sites around your home by drilling and injecting the exterior wall voids. NOTE: If your structure has HardiePlank siding or other types of exterior siding that restrict Sunrise from using the drill and injection method, will have the perimeter wall voids treated from the interior by either the drill and injection method just above the baseboards or by dusting the electrical wall outlets.

The technician will apply control materials to the sill plate area around the interior foundation walls along with treating around all post and blocks that support the sub floor. This application leaves a residual material that will adhere to ants when they travel to and from these locations. This material is taken back to nesting sites on the body parts of ants and will kill other ants that come in contact with it.

Provides a protective barrier around your home and leaves a residual material for ants to come in contact with as they enter and leave the structure to return to the main colony.

Carpenter ants sometimes nest under kitchen & bathroom cabinets. The technician will inspect this area and if needed will inject under the cabinets. For structures with second floors, the technician will take the face plates off the electrical wall outlets on the exterior walls of the 2nd floor and dust behind them. This gets material on the wiring that the ants use to travel around the building.

Ceilings, attics and beams are areas that can become infested with Carpenter Ants and will require special types of applications. When the technician inspects your structure and ants are observed in these areas he/she will consult with you regarding the optional treatments and costs.

What should I expect after the initial treatment?

You may notice carpenter ant activity for up to four weeks after your structure has been treated: this is normal. When you do notice them during this time, they may to be dead, lethargic or very active depending on when they came in contact with the applied material. If after 4 weeks the problem persists, and the warranty is still in effect, please call our office for a no-charge warranty treatment. We will schedule an appointment that is convenient for you to meet with one of our service technician’s who will evaluate the situation and treat wherever necessary.

What should I do after the warranty period?

This initial carpenter ant treatment carries a 60 day service-to-service warranty. In Western Washington, the exterior perimeter treatment lasts about that long before the control material begins to bio-degrade. To protect your home against future infestations from the main outdoor colony or another colony, the exterior barrier should be maintained.

This is where Sunrise Pest Management can help again. We can extend your present warranty by offering our Bi-Monthly Warranty Service Program. With this program we come back every other month and reinstate the outside perimeter protective barrier. This is a wonderful prevention program in keeping ants from re-infesting your home.

If additional treatments are needed between our regular bi-monthly service visits, the service will be done at no extra charge. This service is available as long as you are on the bi-monthly warranty service program.

Why keep my warranty active during the winter months?

Carpenter ants can damage your structure all year round. During the winter months an out of site, out of mind approach to carpenter ants could lead to structural damage.

It is important to understand their seasonal habits to get a clear picture on how this can occur. Carpenter ants generally continue their activity in the nest site even during the very cold weather. During these cold months, they get ready for the next reproductive cycle by excavating wood from wall studs, floor joists, ceiling beams, etc. When reproductive’s lay their eggs, they are eventually placed in these hollowed cavities. This is why structural damage occurs year round. It is not true that carpenter ants die or go away in winter months, nor do they go fully dormant.

The Bi-Monthly Warranty Service Program is a very sensible approach to protecting your home and budget at a low cost. Call today, before your current warranty service period ends.

Do Carpenter Ants cause structural damage? 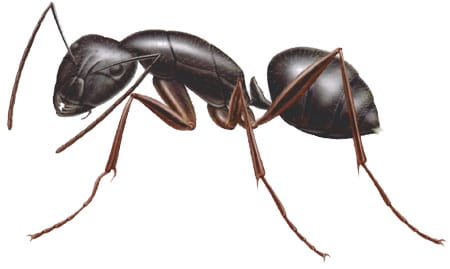 Carpenter ants commonly nest in standing trees (living and dead), in stumps or in logs on the forest floor. Since many houses are being built in forested areas, well established, vigorous colonies are readily available in the immediate vicinity to attack these dwellings. This is especially true when the homeowner insists that the home be built with minimal removal of trees. A number of workers from these large “parent” colonies will frequently move into a dwelling as a “satellite” colony.

Communication and travel between colonies is maintained, and the satellite colony may contain larvae, pupae and winged reproductive. Since these colonies are already established, damage to a house can occur in a shorter time and is not limited to decayed wood. Indeed, these ants may become established in houses still under construction. The size of a typical colony is probably 10 to 20,000 workers, and large colonies can have up to 100,000 workers. Not surprisingly, satellite colonies found in houses frequently contain up to several thousand workers.

Sunrise Pest Management can help you eliminate carpenter ants from your home.

Get a Free, No Obligation Quote

We offer a tailored approach for every customer’s home and business. Contact us today to get a quote or schedule your appointment.